You have so much more responsibility (on the beach). Every weakness is exposed from the get go. You have the elements to deal with. Im still learning how to use wind properly. Its the ultimate adventure and ultimate challenge. There is so much room to cover.
- Kerri Walsh, Pro Beach Volleyball Player

The indoor game is much more of a team game, having to work effectively with a group of 15 to 20 people, striving to improve every day, every drill, even every contact.

The beach game is much more of an individual game within a team sport, much less about organized practices with coaches and much more about just playing the game." -- Karch Kiraly, Pro Beach Volleyball Player 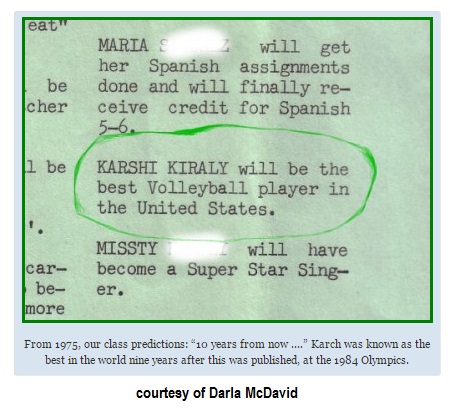 "I believe that as long as you want to do it, and your heart is willing to put forth the effort, anything is possible. A lot of people told me I would never be a good volleyball player or high jumper because I never specialized. But I always knew that I could, believed I could, so I didn't listen to what they said. I just followed my heart and did it."-Tayyiba Haneef, USA Women National Team

"Without ambition one starts nothing. Without work one finishes nothing. The prize will not be sent to you. You have to win it. The man who knows how will always have a job. The man who also knows why will always be his boss. As to methods there may be a million and then some, but principles are few. The man who grasps principles can successfully select his own methods. The man who tries methods, ignoring principles, is sure to have trouble. "
-- Ralph Waldo Emerson

Drills and lead-up activities take considerable practice time and do not produce much transfer, so use them sparingly in later practice stages..It is fruitless to try and train fundamental abilities (e.g. quickness and balance), so concentrate on the fundamental skills instead
-- Dr. Richard Schmidt

I suppose this experience in coaching had something to do with my own orientation to the university and to a teaching career. It also marked the beginning of my own style of management. I always have found if I could create an environment around me in which everybody felt they were learning, I would have a hot group. I have always tried to include people in what I was doing, to encourage them to say what they think, to let them see the problems that were confronting us all, and to create an atmosphere in which everyone could feel at the end of the day, or the end of a week or a month, that he or she had learned something. -- George P. Schultz, Turmoil and Triumph

All the people that "get there,‖ get there because they love what they are doing. Theyre not driven by a work ethic; theyre driven by a love ethic. Michael Jordan plays very hard, very indulgently.

Ben Hogan hit tens of thousands of balls because he loved to hit golf balls. That gets mistaken by the intellect as work. "If you work hard enough, son, and if you keep your nose to the grind stone, son, then you will be able to perform like these people." This is absolutely not the case, not true.

The great performers perform as they do, and do so with such ease, because they love what they are doing. Its not work. Its play. - Chuck Hogan Director, Athletics & the Intelligence of Play

I am 17 years old. It is summer, and football practice is about to begin.

I am suppose to be starting quarterback in this, my senior year, having worked all winter and spring with the coach, reviewing films, reading defenses, diagramming formations and plays.

Actually I have worked my entire life for this chance, throwing 150 passes a day through a tire my father rigged in the opening of our garage, lifting thousands of pounds of weights in our damp basement before two-a-day practices begin.

I am in my romm trying to figure out how to tell my father that I want to quit; that I would rather not give up my after school job to play yet another year of football.

I know to well the old sport adage that adorns many lockeroom walls: "A quitter never wins, and a winner never quits." I know how fathers live through their sons' accomplishments on the athletic field. And now he is in my room and I tell him. He smiles and says, "I'm proud of you.

You've figured out something it took me 40 years to realize-something most people never learn- to follow your heart, not other people's expectations. Of course I'm not disappointed. I'm proud to have a son like you. In that moment my father gave more to me than many fathers give their sons in a lifetime. - Jim Sollisch

Strive for perfection - never be content with mediocrity. You don't win until you conquer the little flaws. You don't beat these great ones until your form is perfect.

This is true in all of life. A flaw in a product can ruin a business. A personal failing, a little one, can ruin a person's life. Don't be content with mediocrity - strive to live up to the greatest within you. - Bob Richards, Olympic pole vaulter

Champions aren't made in gyms. Champions are made from something they have deep inside them - a desire, a dream, a vision.