1896: July 7th - at Springfield College the first game of "volleyball" was played.

1900: a special ball was designed for the sport.

1900:YMCA spread volleyball to Canada, the Orient, and the Southern Hemisphere.

1907: Volleyball was presented at the Playground of America convention as one of the most popular sports. 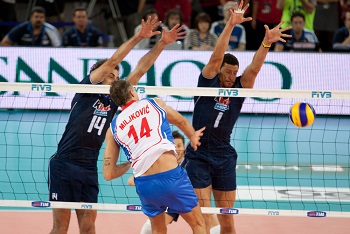 In 1916, in the Philippines, an offensive style of passing the ball in a high trajectory to be struck by another player (the set and spike) were introduced.

1916: The NCAA was invited by the YMCA to aid in editing the rules and in promoting the sport. Volleyball was added to school and college physical education and intramural programs.

1919: American Expeditionary Forces distributed 16,000 volleyballs to it's troops and allies. This provided a stimulus for the growth of volleyball in foreign lands.

1920: Three hits per side and back row attack rules were instituted.

1922: The first YMCA national championships were held in Brooklyn, NY. 27 teams from 11 states were represented.

1928: It became clear that tournaments and rules were needed, the United States Volleyball Association (USVBA, now USA Volleyball) was formed. The first U.S. Open was staged, as the field was open to non-YMCA squads.

1934: The approval and recognition of national volleyball referees.

1937: At the AAU convention in Boston, action was taken to recognize the U.S. Volleyball Association as the official national governing body in the U.S.

Late 1940s: Forearm pass introduced to the game (as a desperation play). Most balls were played with overhand pass.

1947: The Federation Internationale De Volley-Ball (FIVB) was founded in Paris.

1949: The first World Championships were held in Prague, Czechoslovakia.

1949: USVBA added a collegiate division, for competitive college teams. For the first ten years collegiate competition was sparse. Teams formed only through the efforts of interested students and instructors. Many teams dissolved when the interested individuals left the college. Competitive teams were scattered, with no collegiate governing bodies providing leadership in the sport.

1951: Volleyball was played by over 50 million people each year in over 60 countries.

If you enjoyed these tips on volleyball history and would like to keep it close to you at any time, just save this pin to your Pinterest Volleyball Training Board. 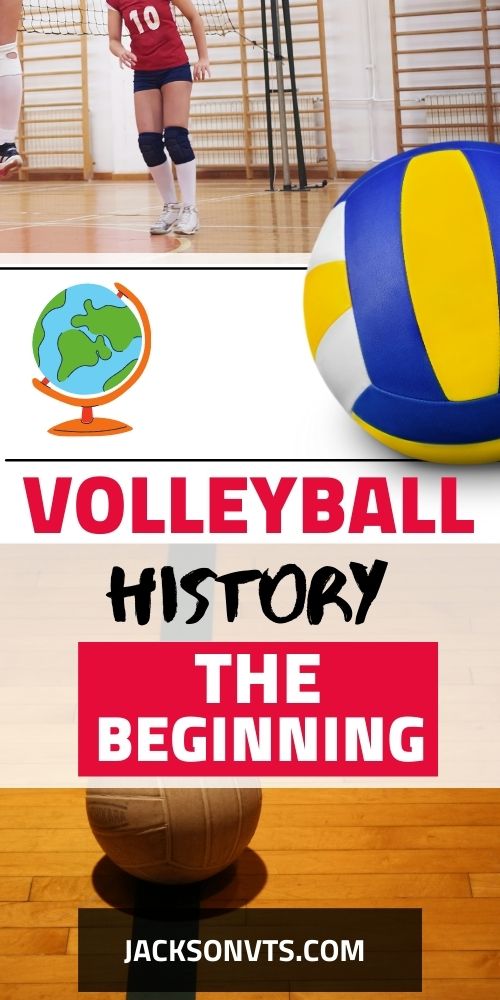 Volleyball History into the 60s

For the first time in volleyball history, in 1964, Volleyball was introduced to the Olympic Games in Tokyo.

The Japanese volleyball used in the 1964 Olympics, consisted of a rubber carcass with leather panelling. A similarly constructed ball is used in most modern competition.

In 1965, the California Beach Volleyball Association (CBVA) was formed.

1969: The Executive Committee of the NCAA proposed addition of volleyball to its program.

1974: The World Championships in Mexico were telecast in Japan.

1983: The Association of Volleyball Professionals (AVP) was formed.

The AVP was created in 1983 as a players association and had been organizing and running the United States domestic tour for professional volleyball players since 1988. Tournaments were held in cities throughout the U.S. with flagship tournaments in the California locations of Huntington Beach, Hermosa Beach, Malibu and Manhattan Beach.

The AVP hosted some of the best professional volleyball players in the world, including the recent teams of Phil Dalhausser/Todd Rogers, Jake Gibb/Sean Rosenthal, Nicole Branagh/Misty May-Treanor and Jennifer Kessy/April Ross. AVP athletes have won at least one gold medal in every Summer Olympics since beach volleyball began as a sport in 1996.

1984: The US won their first medals at the Olympics in Los Angeles. The Men won the Gold, and the Women the Silver.

1988: The US Men repeated the Gold in the Olympics in Korea.

1992: The Four Person Pro Beach League was started in the United States.

1996: 2-person beach volleyball was added to the Olympics.

1998: For the first time in the FIVB World Tour, men and women players are rewarded at the same level with $170,000 in total prize money per Open event.

1999: For the first time beach volleyball was included in the Pan American Games which were held in Canada.

More Volleyball History
History of volleyball. Originating in the US, volleyball is now just achieving the type of popularity it has received on a global basis, where it ranks behind only soccer among participation sports.

Inventor
William G. Morgan pursued a career in Physical Education at the YMCA. Volleyball was orignially called Mintonette, a less vigorous team sport more suitable for older members of the YMCA but one that still required athletic skill.

History and Facts
Volleyball history and facts. The creator, William G Morgan, designed the game to be a combination of basketball, baseball, tennis, and handball. The offensive style of setting and spiking was first demonstrated...