Most cheap volleyballs range from $15 to $20. Usually you can find these recreational volleyballs at stores like Target, Walmart, and Dicks Sporting Goods.

You may also find some great volleyball ball deals online.

Tachikara and Molten both have a wide selection of recreational volleyballs.

1. Contact your Local USAV Region. Often your local USAV region will sell used volleyballs at a discount. For example, your region provides volleyballs for local region tournaments throughout the club volleyball season. By the time the next season rolls around, new tournament balls will likely be purchased and used volleyballs will need a new home. 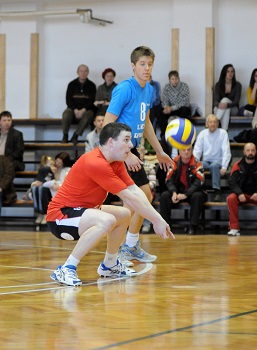 The Tachikara Volley Lite is cheaper than the standard competition volleyballs. However, it is still fairly pricey at $30 to $35.

You often get what you pay for. So be careful not to buy a volleyball that isn't worth playing with.

Molten has recreational volleyballs that aren't too bad for the price.

For example, some cheap volleyballs are too hard to pass with your forearms. You don't want to get stuck with a volleyball that is painful to pass.

MacGregor isn't bad for the price.

Also, you need a ball that bounces well. The less a ball bounces, the harder it will be to play with. The ball that doesn't bounce will be hard to pass. You don't want a ball that just dies on your forearms when passing.

Same with hitting. You want to have a good bounce off your hand when you hit.

If you're unsure of the ball, be sure to try it out first if possible before you purchase.

Is the ball for Indoor, Outoor, or Sand?

Indoor volleyballs are different than beach volleyballs. Volleyballs made for outdoor are made to hand the sun, heat, and rainy conditions.

Be sure to know the difference between an indoor and outdoor ball. You don't want to use an indoor volleyball outside and ruin it.

If you do need a ball to play outside, for example, in the sand at the beach, a cheaper volleyball may be a safer option. Especially if an official beach volleyball is out of your price range.

Most official beach volleyballs range between $40 and $50.

There are also the cheaper replica beach volleyball that cost between $10 and $20.