How to Hit Middle
Spiking Tips

Here are tips for how to hit middle for spiking the ball as a middle hitter.

As a player playing middle, you have 3 main responsibilities.

On this page, you’re going to learn tips for quick attacks and tricking the blocker.

How to Hit Middle and Spike Around the Block

First, you need to look to see where the blocker is standing when the ball is being passed. You need to know if the blocker is following you, staying in the middle, or following another hitter. This will help you determine what court angles are open.

As a hitter, you need to make your decisions based on what the block is doing. You also want to be consistent in how you approach to spike. If you approach the same way every time, then this will make it more difficult for the opponent to read what you are going to do.

If you see the middle is following you, then you need to see them before making a spiking decision. Face the same direction every time you spike so the blocker can’t tell where you are going to spike.

When you see the blocker reach in one direction to block, angle your hit into the other direction.

When the blocker is blocking to your right, then contact the ball on the top right and pull the ball down to your left.

Then just the opposite when the blocker is blocking to your left. Contact the ball on the top left and pull the ball down to your right.

If the middle is blocking directly in front of you, then you have the option to spike to your left or to the right.

How to Fake a Spike

It’s important to fake a spike attempt when you aren’t being set the ball. When you fake the spike, the opposing blocker could stay with you allowing the player that get’s set the ball to be up against fewer blockers. For example, if you fake a quick attack from the middle and the middle blocker follows you when the ball is set to the outside, the outside attacker will have only one blocker blocking them.

If you can help get your teammates into situations where they are up against only one blocker, then you are doing a good job as middle.

How to Fake a Spike

To fake a spike, you need to keep your approach the same. Have a consistent approach so the blockers can’t read you. Timing, spacing, and footwork need to be consistent. You need to have an aggressive approach so it looks like you are going to get set the ball. The goal is to sell the intent of spiking. Communicating loudly with the setter will help draw attention. You may actually end up enjoying faking the spike as much as spiking.

Quick sets are important for beating the blockers with speed and quickness. The middle running a quick will also draw the block which will allow the setter to set the outside hitter or opposite hitter.

It’s tough to block quick sets because the blocker must commit to staying with the hitter that’s coming in for a quick attack. The blocker doesn’t stay with you, then you’ll end up with a free swing on an open net.

If you enjoyed these tips on how to hit middle and would like to keep it close to you at any time, just save this pin to your Pinterest Volleyball Training Board. 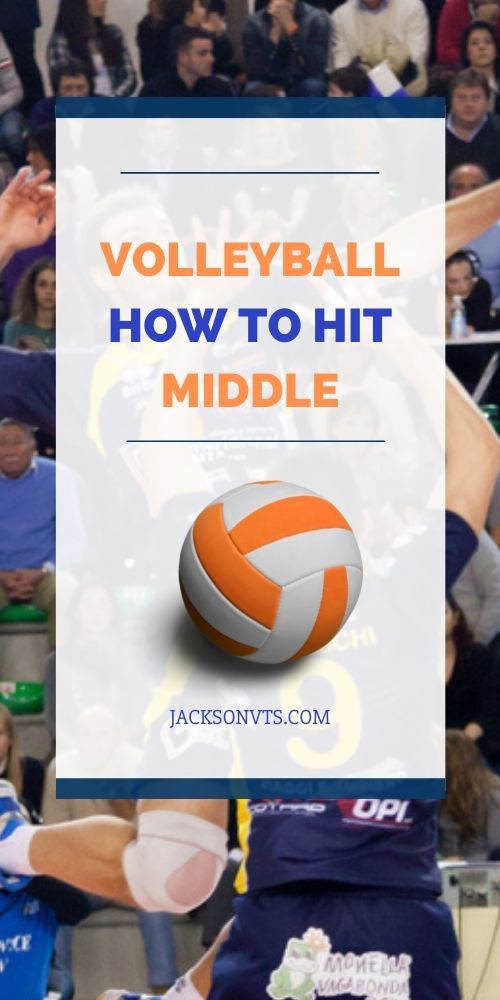 Home › Techniques › How to Hit Middle