The following are molten volleyballs for everyone from beginner to highly competitive.

The Molten L2 is my favorite volleyball. In my opinion, it's the best ball on the market for the price. They usually run between $30 and $35.

The Molten L2 is used more for practices and not so much for competitive tournaments. I find they are a great option for using during private lessons. The balls bounce well and aren't real hard. Buy a set of 6 or 10 of all the same color. This will help distinguish your volleyballs from everyone elses and you'll be less likely to lose them.

My Molten L2's have lasted a long time and haven't worn much.

Also, since the L2 is a cheaper ball, there is less likely someone will run off with it.

The only downside I've had is that you don't want to leave them out in the cold. They'll lose a lot of air and you'll have to pump them back up. I guess you could say the same thing about every volleyball you leave out. I just happened leave my volleyballs in the car outside all night when it's cold and notice significant losses in air when they are left in the car for days. But, like I said, most volleyballs will have this same issue.

The Super Touch and Pro Touch Molten volleyballs are the best and more expensive volleyballs.  The lowest prices for these volleyballs usually range between $40 and $50.

The Super Touch and Pro Touch volleyballs are used in high level club volleyball tournaments.  Molten is the Official Volleyball of USA Volleyball. 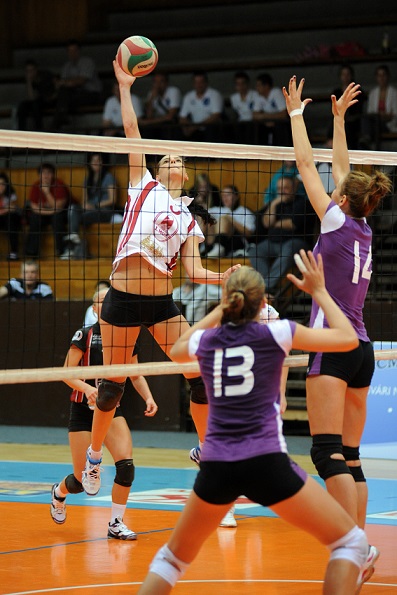 The VB-U12 is the volleyball designed for competitive players under 12 years old. This ball is much lighter than a standard volleyball. The VB-U12 ball is still fairly expensive even though it's a youth ball. This ball ranges between $30 and $40. It's the official ball for USAV competitive 12 and under competitions.

Ball Designed for 12 and under competitive volleyball players

Volleyballs Designed Specifically for Ages 2 to 10

The FLISTATEC Molten volleyballs are the official ball for indoor FIVB competition. This is also the official game ball for the Adult USAV National Championships.

This ball doesn't bounce  as well as the typical volleyball. Since the ball has a harder feel and doesn't bounce off the arms as well, it can be a difficult ball to play with. So I encourage you to play first with the ball if possible before spending $40 to $60 for this ball.

These are my honest thoughts on this ball. I'm not too crazy about this volleyball. The ball takes some getting used to. This ball has a completely different feel than most volleyballs so I would highly recommend practicing with this ball before making a decision to purchase. I have many friends that do like this ball and think it's pretty good. I'm not crazy about the feel of passing it. I think it floats more and is tougher to read the flight of the ball when passing.

Here are some beginner volleyballs that are a much cheaper option. Many volleyball players aren't sure if they are going to continue with the sport. Especially if it's your first year playing, you may not use the volleyball much anymore.

There are cheaper volleyballs available. These run about $15 to $25. These balls are great for youth players that just begin to show interest in the sport. This ball is great for recreation and church volleyball parties.