The following are volleyball approach drills for beginners. These are critical for learning the correct footwork and spiking technique.

Approaching to Spike a Volleyball

The basic steps for the approach are...

There is also a one-legged spike technique called a slide. 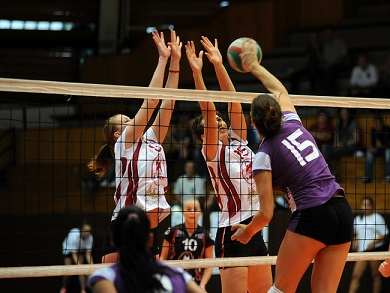 If you're completely new to volleyball, or want to make major changes to your footwork, then it's best to start with training in slow motion.

Over the River Volleyball Approach Drill

For this drill, you need to find a flat object such as a rug. The purpose of "over the river" is to master the steps while stepping over the river (in this case, the rug).

2nd progression: The next progression is to focus on the foot placement when landing. Think of placing the feet pointed more towards the sideline than forward. You almost want your front foot to be parallel to the net. Your back foot isn't turned quite so much. Focus on quiet feet when landing and finishing in stance ready to bring your arms back forward and up.

3rd progression: Do everything as before, but now add in a jump. So now you're bringing your arms forward and jump up high in the air.

4th progression: If your volleyball approach is looking good so far, you can add in a 3rd step. So now, instead of starting just behind the edge of the rug, now start a couple feet further back. All you're doing now is starting on your right foot instead of your left foot so you can now do a three step approach.

Each of these progressions should be done in slow motion at first. The advantage of slow motion is the athlete becomes aware of how the body feels when moving. It's also helpful to watch video of the approach done right. You can also film yourself approaching to see what you look like and see if you're doing it right. A lot players don't believe their technique isn't good until they actually see it on film!

If you've developed a good arm swing and your approach is looking pretty good, it's time to spike using a spike trainer. 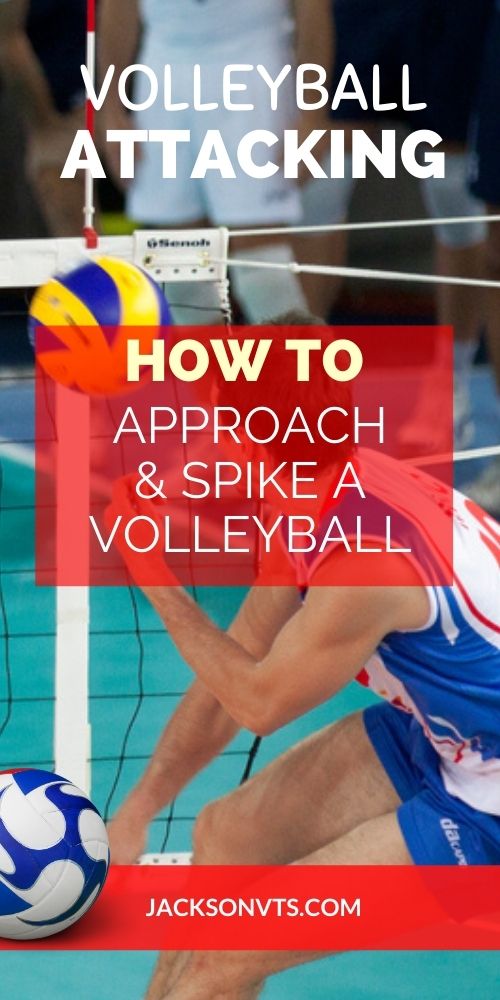 The elbow to wrist arm swing is the final piece of the volleyball spike. Elbow to wrist is the spiking motion you want to use to create hard and powerful spikes.

The elbow to wrist movement should be developed separate from the volleyball approach. The volleyball spike approach is a very technical skill and each phase should be broken down into chunks.

Focus on getting in the same position every time

The elbow to wrist arm action is similar to "hammering a nail".

Think of reaching up high to hammer in a nail. This is the motion to use when spiking a volleyball.

In the photo above, the spiker is in the hammer position, ready to hammer the ball.

Remember, this is the last motion of the spike approach.

Once this motion is developed, go back and take approaches and work on bringing it all together. Approach to the ball and hammer away!

Quick Tips for the Volleyball Approach and Spike

Volleyball footwork tip:
To help timing a high outside set, be on the left foot when the setter is releasing the ball. After the left step, bring the arms back, then step with the right foot to where the ball is going.

The steps to hit a quick are...