The volleyball libero is a specialized position to help improve team serve receive and defense.

Volleyball Libero is a Specialized Position

On almost every level of organized volleyball, players are assigned rolls and have specific positions that they play. Players will have specific assignments for the front and back row. At the lowest level of play setters are designated in the front row. Positions include setters, outside hitters (right side or left side), middle hitters and libero's.

The libero position allows for a great defensive player to get more court action.

The position of libero is becoming more and more critical to a teams performance and has definitely elevated the importance of the defensive specialist and their skills. It also allows more participation opportunities by giving seven rather than six players court-time. 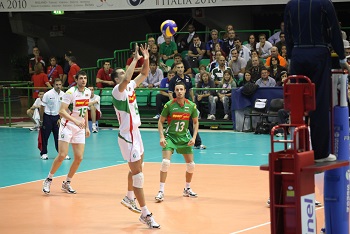 Rules for the Libero

The rules for the libero are different than other players.

For one thing, the libero wears a different colored jersey than the rest of the team. This is so the referee can more easily identify which player is the libero.

The referee needs to know which player is libero because the libero has different rules.

Role of the Libero

Tactics of the Libero

In serve receive, the libero should be lined up to take most of the balls.

For defense, the libero usually plays left back. This allows the outside attacker to play middle back and hit out of the back row from the middle of the court.

Another option is for the libero to play middle back defense. This gives the libero more freedom to move around and cover holes in the block.

The libero should feel comfortable playing any position in the back row.

The libero usually replaces middle blockers in the back row.

The volleyball libero should take the place of a player who has difficulty passing, playing defense or who cannot hit out of the back row. A great middle blocker with good ball control skills should not automatically be taken out of the back row especially if he/ she can score points attacking.