Volleyball lineup strategy varies from team to team. The following are some important tips for rotation and lining up your team.

How to Fill Out a Line Up Card

Among the responsibilities of a volleyball coach is filling out and submitting a line up card for your team.

What's the purpose of the lineup card?

The reason the coach needs to fill out a line up card is so the referee and scorekeeper can keep track of serving order and the rotation order of players on the court.

The line up card or roster lists each players name along with jersey number.

The line up card is also sometimes referred to as a line up sheet. The line up sheet consists of the rotation order, what players are going to play in that game, and the libero (if any).

The line up cards and sheets vary from organization, but they all basically contain the same information that helps the referee and official scorekeeper.

Each organization has their own specific rules to when line ups need to be submitted.

For volleyball lineup sheets, these need to be filled out and submitted two minutes before the game starts. Again, this time varies from organization. 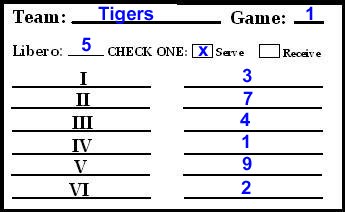 On the line up sheets, the coach fills in the serving order and libero number (if any). The libero positions can be changed from game to game. There's a spot on the card to fill in the jersey number of the libero. This number must be filled in, if not, the libero can't play in that game.

Basically, enter the jersey numbers of your players in the six spots provided on the card.

I is the first server. II is the second server, and so on.

If you're team is serving first, I is the first server in right back position.

This means that when your team is receiving to start the game, your first server is on the front row because your team will rotate before they serve.

After the information is filled in, the coach signs the volleyball lineup sheet and turns it in to the scorekeeper.

At Beginning Levels of Volleyball

For younger players, the strategy for the coach is centered on getting as many kids as possible to be able to play in the game. So the coach has to be careful on deciding how to have kids rotate and sub. 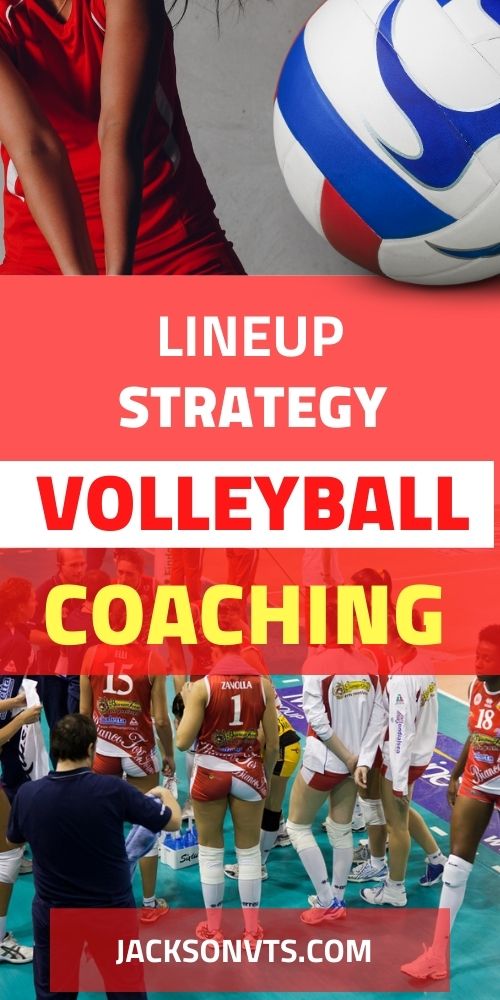 Strategy for How to Line Up on the Court

It's important to note that there isn't a right and wrong volleyball lineup. There are many various strategies for how to line up on the court.

See the setter coming out of right back in this serve receive formation?

The goal of passing in serve receive is to pass a ball in a way that makes it easiest for your setter to set an attacker. You also want certain attackers to be set certain ways. Also, some attackers are better at attacking the ball than others.

In the picture above, the setter is following the middle (the libero is in for her on the back row) in the rotation.

Setter following the middle is usually the way to go for high level volleyball.

In the following volleyball lineup, the setter is following the outside hitter (OH). This strategy is sometimes used by lower level teams.

At the beginning level, the main focus of serve receive is to just pass the ball to the setter without giving much consideration to the offensive scheme.

So basically, how you line up on the court will vary depending on many things such as your teams experience, skill level, and what type of offensive system your coach wants to run.