For this next video, I want to share some important tips on setter footwork. 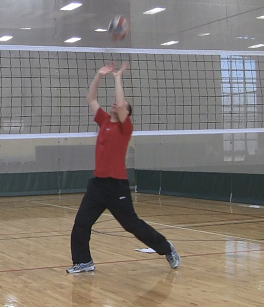 Ideally, when you set the ball, you want to be finishing your steps left-right as you push through the ball. Feet are staggered and there’s a weight transfer from left foot to right foot.

It’s also important to mention, always start first, by facing the court. The setter should always start in an athletic stance, facing where the ball is being passed. This is very important because the more prepared the setter is to move, the more efficient the setter will be when moving to get in position to set.

So as the ball comes in, the setter steps left-right, turning the hips to square up to the outside hitter. So ideally, the setter always starts by facing his or her team, moves quickly to get to the ball and squares up to the left front area of the court.

For the ball that isn’t so easy, the setter must learn advanced footwork that involves jumping off two feet, jumping off a single foot, or finishing steps on either the left foot or right foot.

By training the more challenging footwork patterns, the setter will become more athletic and fluid, with the ability to make great plays on the most difficult passes.

Get My Setter Secrets!