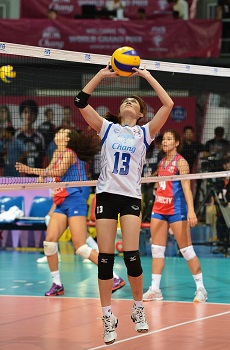 Volleyball setting drills for teaching players how to set.

A successful setter moves in a direct line to the ball and then takes a position to deliver it efficiently to the hitter, yet presents deception to the defense across the net.

The Ideal Set - Defining a Set

A set is a delivery of the ball, usually from the fingers above the head with a release by pushing the ball upward. The set ball appears to float to a hitter, not spinning, from the forehead toward the ceiling.

For players that are inexperienced or just new to volleyball, first start with volleyball setting drills that focus on technique and hand position.

The following drill is for beginning setters...

The setter holds hands up high, thumbs at the forehead. The coach tosses the ball lightly into the setter's hands repeatedly.

The setter, to return to correct starting position each time, touches the thumbs back to the top of the forehead before setting each ball.

This drill trains the setter to keep the hands high. This can be a difficult task to learn when one is neither strong or experienced at setting.

Once the setter improves this skill, she won't need to be touching the forehead with the thumbs anymore. The purpose of this drill is to master "setter positioning".

Ball control is a very important volleyball skill. Volleyball setting drills should be designed to force the setter to "fight" to get in position. The best setters are usually the ones that are the best at getting in position to set. 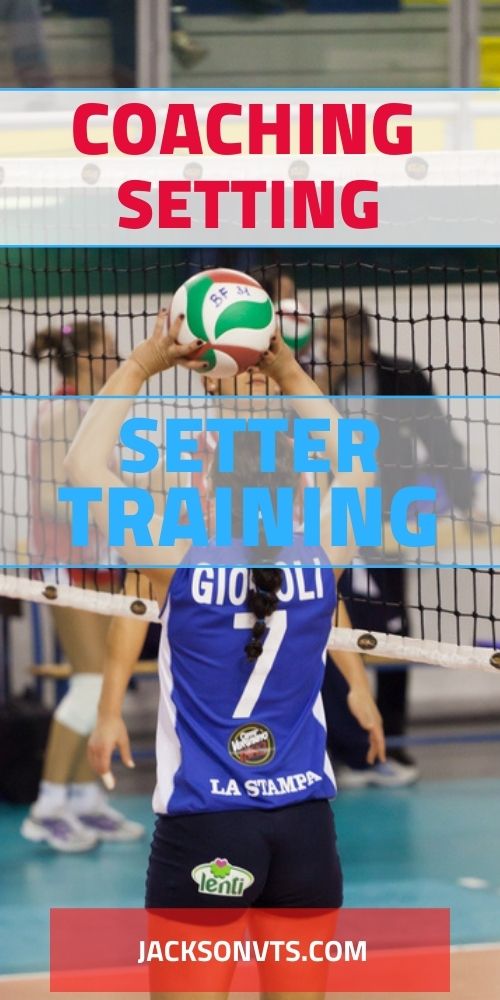 Drills to Train Decision and Reactions

This drill requires 2 to 3 setters and 2 balls.

The coach or player tosses to the setter. The setter sets a specifically assigned set to setter B who is standing in the assigned hitting zone.

The ball is then caught by the 2nd setter. The 2nd setter bounces a second ball to the tosser who repeats the toss to the same setter. This allows one setter to do a series of repetitions on the assigned set and then the setters rotate.

Note: The purpose of the drill is to move quickly and efficiently getting in a lot of reps. Many repetitions in a short time creates a better learning environment than a few sets of the same or longer period.

Get My Setting Secrets!