In comparison to most team sports, the skills in volleyball are fairly technical. Therefore, it's important to learn proper technique for each skill.

The main skills in volleyball are spiking, passing, setting, digging, blocking, and serving. There are specific movement patterns to learn that will allow for better skill execution.

The following are the skills and the specific movements of volleyball.

The key movement patterns for spiking are... 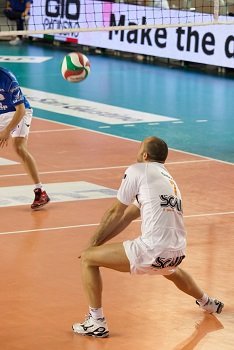 For forearm digging on defense, think of moving sideways leading with the heel. Get your heel to the spot first.

Next, angle your platform to the target as you absorb the spike. Focus on cushioning the ball to avoid overpassing.

There are various floor moves for playing defense. A few are... the Chinese collapse, sprawl, and pancake.

Of all the movements of volleyball, perhaps the most exciting is a defender making an unbelievable dynamic save.

The key to serving is a consistent toss and contact.

Like most skills, the key to setting is getting in position. Footwork is critical.

Passing is a critical skill. Without a pass, a team won't have much of an offense.


Home › Techniques › How to Move

GET MY TRAINING SECRETS!