Learn about volleyball drills for passing including movement technique, anticipation, and tracking the ball are keys to an effective pass.

Tips for Volleyball Drills for Passing

When passing in serve receive, it's usually best to have one foot forward. Pass with the right foot forward and feet slightly wider than shoulder width.

Your weight should be on the inside balls of the feet.

This position is athletic and has you ready to move in a split second.

Avoid sitting back on your heels as the server strikes the ball.

The knees should be slightly flexed. This allows efficient movement to the oncoming served ball.

To develop habit, repeat this ready position in the early stages of learning how volleyball is played. 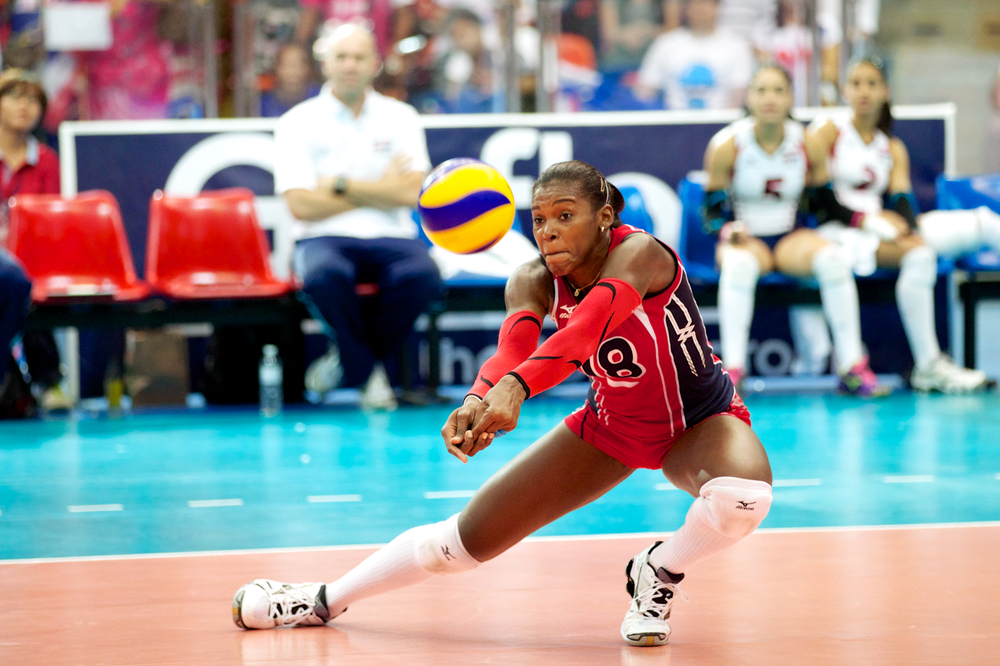 This drill is good for warm-up because it's game-like. The purpose of the drill is to use passing skills while being game-like using ball control.

The court is divided in half length wise. A setter and hitter begin at the net on each side of the court. Start with one digger in the deep corner with another digger directly behind. The coach and feeder are off the court near the net.

1. Initiate play with a tossed ball to the digger. The digger passes to the setter who then sets the hitter.

2. The hitter hits a down ball or throws the ball to the digger on the other side of the net.

4. Players try to maintain a continuous sequence of dig, set, and hit with four players for a minimum of two minutes.

5. After a set number of balls, the diggers switch places with the hitter and setter.

Have beginners throw the ball over at the digger until proficiency increases.

Hitting skills should gradually increase. Players can also improve hitting by spiking the ball continuously against a wall on their own.

Have players change from offense to defense without stopping play of the ball by moving quickly right after the ball is hit over the net.

Training movement patterns is an important part of volleyball drills for passing. The efficiency and form of movement should be a prime concern of all coaches and players.

The purpose of this drill is to increase the amount of time players can maintain focus while passing.

Six to eight players spread out along the sideline, facing one another. Players should stand slightly staggered across from one another.

2. That player passes the ball across the court and play continues with each player receiving a ball and passing it across court.

3. As soon as the first player passes the ball down the line, the coach tosses another ball to start again.

4. Repeat this for all the volleyballs. The goal is to pass all the balls.

5. When a ball drops, collect all the balls and start again.

This is a great drill for getting many ball contacts in a short amount of time.

As players communicate and work together, watch for leadership and position the leaders in the lines strategically the next time you run the drill.

Perform this drill with forearm or overhead passing.

Drills for passing involve proper movement during contact. Focus on playing the ball and not having the ball play you.